It looks that way. Apparently, this Web page of Blizzard’s has everyone excited and abuzz with speculation and rumors. Word has that Blizz made a statement that they would make a special announcement soon (read: Gamescom 2013 next week): “We’re making a special announcement that’s sure to capture the attention of the Heavens, Burning Hells and all the shadowed places that lie between.” There you go.

Blizz, fix the itemization first will you? Come on. Or are you getting too greedy that you’ll fix it in the expansion so people will have to pay? I mean, you’re Legendary items are bleh, boring, and there’s really nothing legendary about them. Just same stats over and over again, which you can find in Rare items (sometimes even better).

Tsk tsk… those last lines are a total waste…

Well not so much as, according to many fansites like this one, this character is a homage to a NPC/Super Unique monster in Diablo I. Here he is, Lloigor the Crazed, who is an echo of Zhar the Mad from the first game. 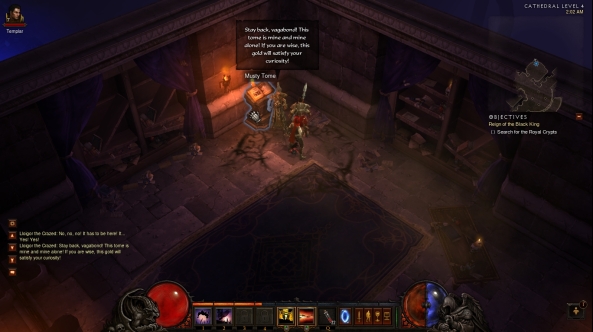 I wasn’t able to get a screenshot when he became a Super Unique monster. Was too busy trying to kill him with my lowbie Demon Hunter. LOL!

For those of you who are fans of the sci-fi book series, Dune, and the high fantasy book series, The Wheel of Time, you’ll be delighted to know that there are references to these two in Diablo III.

These images should be self-explanatory to the fans. 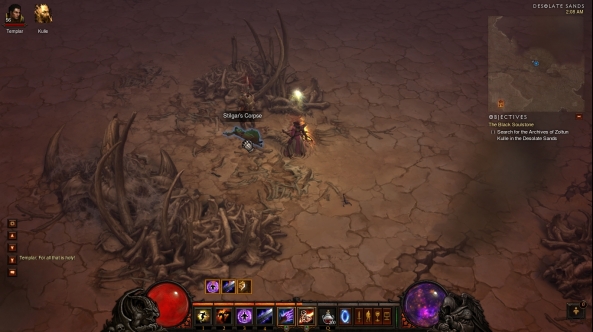 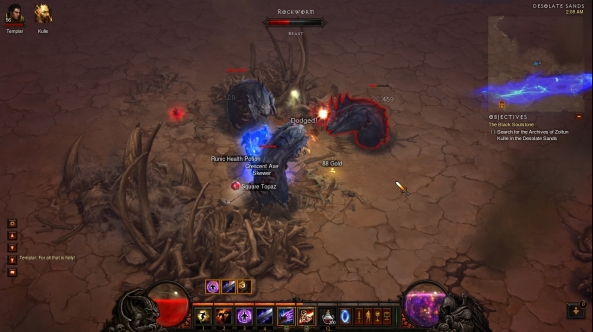 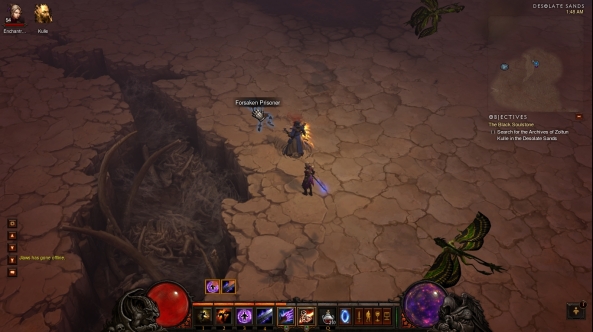 Is it my fault that when I installed the game and launched, it was being a “know-it-all” and chose to use “The Americas” region/server when I created my character? If you want your game to be customer friendly, it should ask the player which servers they want to play because chances are, they’d be too excited to actually think about it.

Do I have to go through the forums every time a patch comes out and the game doesn’t patch on its own? The patches before had no problems. So what’s the problem Blizzard?! I had to search a bit on the forums to find the solution!! Players get frustrated if they have to do something like this, you know. Not all players would know that the game will decided which server they’d be playing for the first time.

The following is a re-post from the Diablo III forum in Battle.Net. Thank you Barthus for posting this! The steps are easy enough to follow and I didn’t encounter any problem. But people shouldn’t have to go through this. Sheesh!

This may apply to you if this is how your game/launcher is behaving:

On login you get a message saying “A New patch for Diablo III is available” and it also says that your game will be closed and the patch will be applied. The game closes, the Launcher comes up saying “Game is up to date” and no patch is applied.
—

Basically, the “new patch” message means your Diablo III.exe or battle.net.dll does not match the version accepted by the server. If different regions are at different versions, you need to set your patch_url to get updates meant for the region you play in.

If you play in Europe or Asia, change the patch_url accordingly and follow the steps under “Reverting the client to the correct version”.

This is how you can set your client to get updates whenever they’re released in the Americas region: (Shouldn’t be needed if you use a client meant for the region you play in.)

Before you start, make a backup copy of the original .agent.db file. (to restore in case something goes wrong)

1. Go in your Diablo III folder.
2. Open the .agent.db file on WordPad.(This file may be hidden and please, do not delete this file)
3. find the “patch_url” line and change its value to:
http://enUS.patch.battle.net:1119/patch4. Save and close the file.

6. Once inside the Battle.net folder, select and delete the Agent folder. (don’t skip this step)

Now, if the issue was the launcher not patching the Diablo III client because it was using a different patch_url, your client should be patched and you should be good to go. However, if you play in a region that’s behind your client’s version, you need to revert your client to the previous version.

The above message is the error you get when your diablo3 client version is ahead of the patch_url set, if that happens, this is how you should proceed.

1. Delete the Updates folder. (Diablo III\Updates)
2. Delete the Diablo III.mfil file
3. Delete all files named d3-update-10235 in the Data_D3 folder. Delete only the ones added in the most recent build, 10235. Go in “Data_D3\PC\MPQs” and look inside base, LOCALE, Win, OSX and Cache folders.
4. Replace your Diablo III.exe with an older version if the file (Must be older than 9991. And backup the original file, just in case)
5. Run Diablo III Launcher to repatch the game.

If you need a Diablo III.exe for step 4, you could download this one:
http://www.gamefront.com/files/21864092/Diablo_III_exe_1_0_0_8370_zipThis file was extracted — by me — from base-Win.mpq using MPQEditor, and if you don’t want to download this file, you could do the same. (Just google MPQEditor)

If the regions are at different versions but changing the patch_url doesn’t help:

1. Your client version may be ahead of the region you play in. If that’s the case, just follow the steps under “Reverting the Client to the correct version.” (It’s on the original post)
2. It’s also important to check — in-game — if your client is set to log on to the correct region.
3. Make sure you followed the instructions correctly.

An error that a lot of people are going to get:
ERROR: The file C:\Program files (x86)\DiabloIII\Updates\d3-0-10057-Win-final.MPQ appears to be corrupt. You may need to download this file again.
In this case, just delete the Updates folder to re-download the MPQ patch. (Diablo III\Updates)

If you see a big “Install” button, close and reopen the launcher. If that doesn’t work try deleting the Updates folder. (This is being caused by a bug)

How to Repair Diablo III:

If you messed up and believe your Diablo III Install is broken, there’s no need to re-download the entire game. You should be able to repair your Diablo III install by following the instructions on this post: http://us.battle.net/d3/en/forum/topic/5271498956#4

Containing scenes from previously revealed cinematic videos, featuring Leah and Azmodan, as well as new footage of Imperius, the Archangel of Valor – awesome rendering of him, I must say! I can’t wait to meet him! – and Tyrael, the Archangel of Justice, and of course, Diablo, the Lord of Terror!

On February  18, Jay Wilson, Blizzard’s Game Director for Diablo 3, posted an article in the official Diablo 3 website discussing changes to the character skills and skill runes.Of particular note, skill runes are no longer dropped items; instead, they are built-in to the skill system and will unlock at pre-appointed levels. Each skill has five available runes and they give different effects to the skill (just like before). The skills themselves have hardly changed but there are has been some rearranging of when certain skills are unlocked, as well as how the skills are grouped together.

Thanks for visiting my site. Feel free to leave comments at the Guestbook page.